I have to be honest–I am not a huge fan of buttercream frosting. 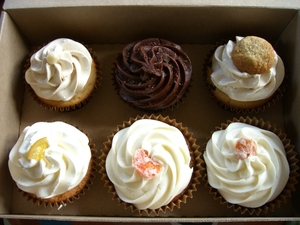 I thought I was, but then I realized I was fooling myself. It’s just too, you know, buttery. I really prefer cream cheese frosting. That said, I won’t turn away buttercream frosting. But the reason I am blathering on about buttercream frosting is because I got these cupcakes from Cupcake Jones, and all but the carrot cake cupcakes have buttercream frosting, and hence my epiphany. So Cupcake Jones is among the newest of the cupcake places here in Portland. I got a $20 coupon for $10 through this site, and for that $20 (okay, $19.50) I got 6 cupcakes. Yes, that is $3.50 per cupcake, which does seem a little spendy to me, but whatever, they are cupcakes, and I’ll pay for them (but actually I didn’t pay full price, did I?). The carrot cake one was pretty moist and tasty. The chocolate cake was on the dry side, as was the lemon cake (but it still tasted pretty lemony). They are good-sized cupcakes, and they have some filling, which is fun, but I wasn’t overwhelmed. That doesn’t mean I won’t go there again or would turn down one of their cupcakes if presented with one. Or two.
This entry was posted in food. Bookmark the permalink.