Good golly, but I am actually going to talk about YARN and such knitting terms as I-CORD. Can it be? I must say that seeing Kay and Ann proved to be inspirational, and I am back in sleeve hell and determined to actually FINISH a sweater in 2008. How do you like them apples.


What is this thing? I found it hanging in my father’s closet, a closet that remained sealed for at least a decade, most likely (my father was a major packrat, and he had so much crap piled up in front of the closet door that the closet was inaccessible). I thought maybe you swung it over your head and hit your back with the pom pom for a soft massage, but my buddy Megan (cancer-fighting Megan) figured it out!

It is some sort of scarflet! Isn’t it awesome? I totally want to replicate it, as the existing one is made of nasty, scratchy acrylic yarn. Genius Kay manhandled the scarflet and declared, “Why, it’s I-Cord!” or something to that effect. I think it’s giant I-Cord. So, my plan is to find some scrumptious, fat yarn and make one of these. 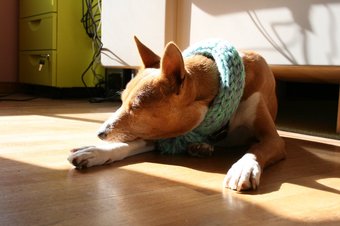 Yup, I’m pretty excited about it. I predict it’s going to be the Next Big Thing. It will spread like wildfire on Ravelry. Really.
This entry was posted in knitting. Bookmark the permalink.