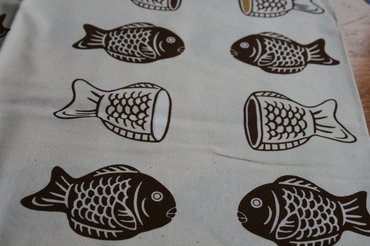 Our friend Yumi came to visit from Japan a few weeks ago, and she brought me some super yummy fabric. The fabric above features “taiyaki,” a fish-shaped cake sort of deal with red bean paste inside. I love the combo of traditional and quirky. 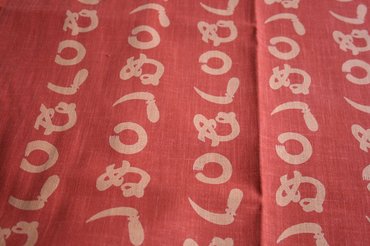 This one says “kamawanu” on it. The story behind the design is really interesting. Here’s an explanation (stolen from here):
“The `Kamawanu` design consists of a combination of pictograms and syllabary characters, which are pronounced as `kama,` `wa` and `nu` respectively.
The first is a picture of a sickle tool, which is called `kama` in Japanese. The second picture is of a circle or ring, which is called `wa` in Japanese, and the final picture is the character `nu` from the Japanese hiragana syllabary. The combination of these produces the sound `kamawanu,` a phrase that translates as `to not bother` or `not care.`
In essence, it is the Japanese hieroglyphic version of `never bother` or `don`t worry.”
Pretty cool, huh? Stay tuned for more Japanese pen discussion. My brother got back from Japan last week and brought me a boatload of writing utensils.
This entry was posted in sewing. Bookmark the permalink.

10 Responses to would you like a fish torso with that