didn’t this used to be a mostly knitting blog? 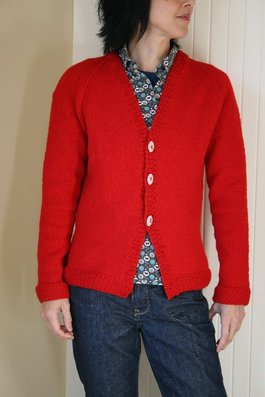 I don’t even want to say how long it took me to knit this dang sweater. I think I started it a year and a half ago or something ridiculous like that. I just lost my knitting mojo for a while. I usually knit in the evenings while parked in front of the TV, but this last year I spent the evenings sprawled on the couch in front of the TV.
Anyway, this simple cardigan was knit in little bursts, and it kind of shows. I wanted a simple, everyday sort of sweater, and in that respect it pretty much works. The sleeves are a tad on the snug side, but I think that’s because my gauge changed over the course of the cardigan. Yup, I began knitting more tightly. Maybe I was feeling more uptight. Do you all share that theory? That how tightly one knits is a reflection of one’s personality? For instance, my mother? Super loose knitter, and yes, she is a pretty laidback chica. 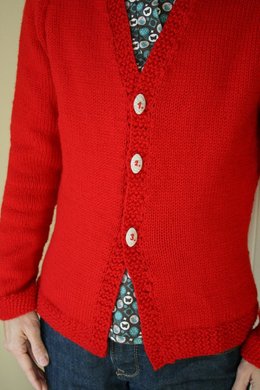 And here’s a better view of the buttons. There are two more buttonholes, but I only had three of these buttons, and really, I’m not going to button those bottom two, anyway.
The pattern is one I made up using my Knitware software. I used the KnitPicks superwash wool, which is actually very nice and soft. I think superwash is my wool of choice, especially after accidentally shrinking an all-wool handknit sweater in the wash last year!
This entry was posted in knitting. Bookmark the permalink.

22 Responses to didn’t this used to be a mostly knitting blog?