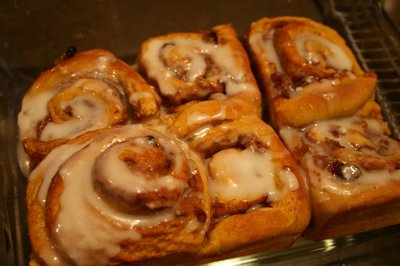 I don’t know about you, but I am so impressed with myself for managing to put up two posts in two days! Ha! But anyway, some of my running buddies and I have developed a Thanksgiving Day tradition (we’ve done it two years in a row, so now it’s a tradition, right?). We do the Turkey Trot up at the zoo then have breakfast. Last year I made cinnamon rolls, so this year I made more cinnamon rolls! This year, though, I used a new recipe, the King Arthur Flour pumpkin cinnamon rolls.
A few changes I made: I didn’t have any “King Arthur White Whole Wheat Flour” so I just used the King Arthur Unbleached All-Purpose Flour for all the flour. Also, I thought the dried cranberries and candied ginger might freak out a few people, so I used golden raisins instead. Oh, and I proofed the yeast first rather than dumping all the ingredients together. Now, the recipe says to put these into a 9″ square pan and to kind of squish them in there. The only problem is the rolls in the center were a bit too underbaked. I like my cinnamon rolls doughy and more underbaked than overbaked, but these were just gooey dough, and it was kind of gross. If I had baked them longer, though, I think the tops would have been dry. I am not sure how to solve this dilemma. Perhaps I will use a rectangular pan next time (please note: I didn’t bake the buns in the pan in the picture). Other than that, though, the rolls were quite tasy, and I think this recipe is definitely a keeper!
This entry was posted in baking. Bookmark the permalink.