summer swimmin’; or, what I learned in swimwear class 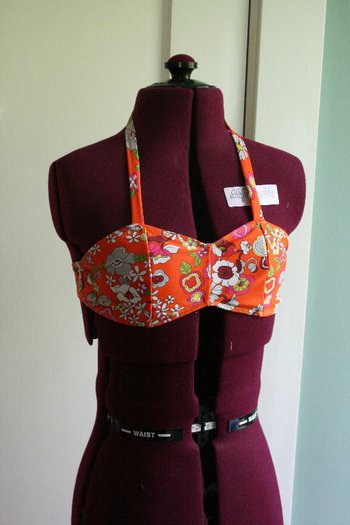 Okay, so this is all about the learning PROCESS, and how failures can also be successes. Or something. Anyway, I just finished taking a swimwear class with Portland Sewing, the great school where I took patternmaking. I learned a lot, including the following:
– why didn’t I know about the 3-step zigzag stitch before?
– have no fear!
– cutting through elastic is not advisable unless you use clear elastic, but that stuff is squirrely as heck
– you can say “crotch” as often as you like, and nobody will bat an eye
– there is a reason swimsuits are so expensive 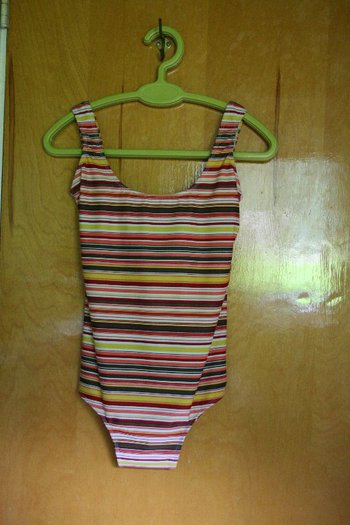 So, in class we all used the same pattern. I made the one-piece suit shown here. I had spandex in my stash (yes, I have a spandex stash, and I am not ashamed), so that’s what I used, figuring this was going to be an experiment. The suit came out okay, but there are some fitting issues, ones I can fix for the next attempt:
– whoah, that crotch (see? I said crotch again!) panel is too wide!
– the pattern has some ruching in the bust area to accommodate the bust, but hey, I barely have a bust, so the ruching just looks like a bunch of extra bunched-up fabric
– while I do not have an ample bosom, I do have, you know, headlights, so some padding in that area would be nice. The pattern does have a bra shelf lining, but it is not padded
– the neckline is a bit lower than I would like
So now you may be wondering what the deal is with the bikini top, or perhaps you have given up and clicked away. Well, I got all antsy and inspired to try to draft my own bikini top, so I did. The problem is I kind of winged it. I also had several small pattern pieces, and I got kind of confused as to which side was up, the side, whatever. At one point I sewed the neck strap to the bottom of the top. Oops. I also didn’t really do the elastic correctly, since I did this before I learned the magic formula (measure the length of where you need elastic and subtract 2″). So, I don’t know that I can actually wear this bikini top. It is kind of bunchy in spots and just kind of ill fitting. 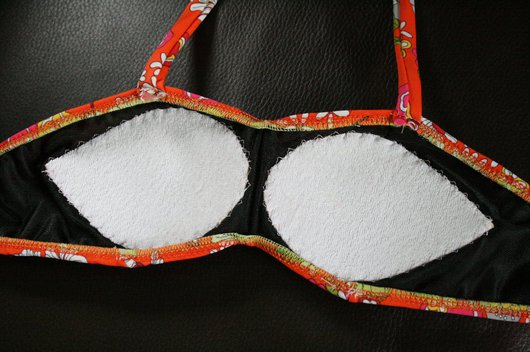 But look! I was pretty excited about these little inserts I put in. I got this great foam stuff at RCT Fabrics that is designed, I believe, for the padding in bicycle shorts. It’s foam on one side and sort of a terry on the other, and it is wicking. I cut these out and attached them to the lining using the 3-step zigzag, and I think it worked pretty well.
Now hopefully the weather will finally get nice (we have had record rainfall here in the City of Roses) enough that it will officially be swimwear season!
This entry was posted in sewing. Bookmark the permalink.

9 Responses to summer swimmin’; or, what I learned in swimwear class