party dress; or, the long and winding road 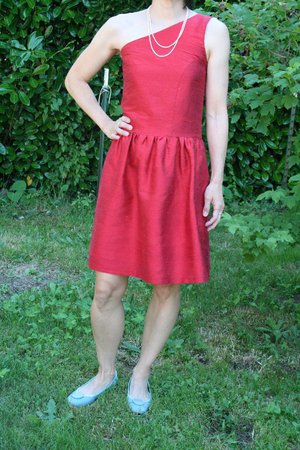 Here we go again with my toils in patternmaking! I want to keep hammering away at patternmaking so I don’t forget what I learned and also to try to improve my very limited skills.
So, when we got invited to a wedding, I figured it was the perfect opportunity to make a party dress (also because I didn’t really have a dress to wear). I had seen a Grecian neckline dress at J. Crew that I really liked, but I tried it on, and to say it did not fit is an understatement. Armed with my patternmaking knowledge (ha ha ha), I decided to go for it:
1. The J. Crew dress had a princess seam, but I was afraid that trying to do a princess seam AND a Grecian neckline was going to really rattle my tiny brain, so I just followed the instructions in my patternmaking textbook

for the Grecian neckline and made a muslin. Disaster. I got kind of confused because there was a top piece and a bottom piece, and I wasn’t really sure how things were supposed to come together. A horizontal seam across the bustline seemed kind of weird. The muslin looked insane.
2. After that I decided I needed some additional guidance, so I bought a pattern that had an armhole princess and a Grecian neckline. Yay! It wasn’t exactly what I wanted, but I figured I could adapt it. I decided to just sew up a muslin of the pattern in case it miraculously fit (because then I wouldn’t need to do any drafting), but of course it didn’t.
3. On to Plan C! I went back to drafting my own pattern, but it was really helpful to have the purchased pattern to refer to. I started with the armhole princess seams then did the neckline. I had to make a couple of muslins but got to the point where I felt I had a workable pattern.
The Good:
– I think the dress came out pretty well, and it is just as I had envisioned it
– I think I did a decent job with the lining. I know that sounds silly, but hey, I like the lining
– I’m very pleased with the fabric and how much it cost. I wanted to use silk doupioni, but I didn’t want to spend a ton in case I ruined the dress. Hello promotionally priced silk doupioni from fabric.com! I got 2 yards of silk doupioni, 2 yards of cotton broadcloth for the lining, a zipper, thread, and a couple packs of needles for UNDER $30. Thank you very much.
– Silicone pasties

The Bad:
– Should I mention the puckers by the armholes? Well, they weren’t there when I was fitting the bodice. I think they appeared because I tried a trick of sewing some elastic to the lining to pull in the strapless side of the bodice. I think I placed the elastic incorrectly or something. By then it was too late to remove the elastic, so I just figured, screw it, nobody is going to care. After I got home I did take the elastic out, and I think next time I wear the dress I’ll just use some double-stick tape (they have that for clothes, don’t they?) to keep the strapless side secured.
If you’ve read this far you deserve a prize or at least a visit to a mental health specialist. Thanks!
This entry was posted in sewing. Bookmark the permalink.

12 Responses to party dress; or, the long and winding road