Gone to Paris Restaurant, that is. It’s our 8th wedding anniversary today, so we went out for a nice meal to celebrate (okay, want to hear something really pathetic? We made the reservation for 7:15pm so we could watch the east coast feed of 24 before we rushed off to the restaurant!). Peter even brought me a flower. He hardly ever gets me flowers. As you all know, I prefer edible items. Heh heh.
I was too embarrassed to take photos of our food, but let me tell you, it was yummy. We had the fixed price meal, which is a great deal–you get an appetizer, entree, and dessert for $29.50. For the appetizer, I had the Spiced Sauteed Shrimp with Oranges, and Peter had the Escargot with Mushrooms. For the entrees, I had the Pan-seared Squab with Braised Savoy Cabbage, and Peter had the duck. It had some foie gras in there somewhere, too, I think. I had never had squab before. It was a bit fattier than I had anticipated, but it was delicious. For dessert Peter had the dark chocolate cake with creme anglaise. That was no cake, though. I swear it was like some velvety chocolate mousse-like goodness! I had the apple tartin. We also got some free little goodies: gougeres at the onset of the meal and a hazelnut parfait with dessert. Everything was impeccably presented, and the chef even wandered around talking to people.
Since I can’t show you any evidence of our meal, I will leave you instead with another image of heavenly food (I had to mailorder these because it is not readily available on the west coast): 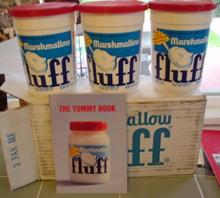 20 Responses to gone to paris