I yarn for San Francisco

I just got back from a great weekend in the Bay Area! I got to spend good chunks of time with Rachael and Joanna, which was a lot of fun. I think Rachael is becoming the Official Bay Area Knitblogger Hostess, don’t you? Sadly, I didn’t take nearly enough photos! Anyway, I figured I’d break things down into categories, since not everyone probably wants to hear about my running (which is why I rarely talk about it) or what I ate (don’t you want to know what I ate, though? Don’t you?).
KNITTING: First, I have to say you should NOT go to a yarn store with either Rachael or Joanna if you DO NOT want to enhance your stash. Really. We went to ArtFibers after the marathon expo just for kicks. It was, after all, just up the road a few blocks. I was not planning to buy anything. The problem is the place is captivating. The yarns are not available in regular old yarn shops; they are custom made for ArtFibers. They do other evil things to entice unwary knitters as well–they hire cute people like Rachael’s friend Kira who say things like, “Well, if you spend over $100, you’ll get a 10 percent discount.” They also have comfy chairs and needles so you can sit and swatch. That way, when they make your custom pattern, which is free with yarn purchase, the pattern will be written to your gauge. NO MATH NECESSARY. Isn’t that horrible? And then if you go with Rachael and/or Joanna and ask which yarn you should get, because you don’t feel you should really get both, they will say, hey, if it were me, I’d just get both. So that’s what I did. Two very different yarns and two very different projects. 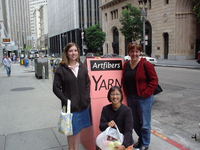 Here I am with the temptresses. Do I look dazed?

And the yarns, safe at home. Yup, that Kyoto is the glowing stuff that Rachael got last week.
RUNNING: So the reason I went up to the Bay Area was to run the Chronicle Marathon. I’ve run it before, but they keep changing the course around, which keeps it interesting (well, as interesting as running 26.2 miles can be). It all went fine, but I have no official time, because they DIDN’T GIVE ME A CHIP. Without the chip, you’re out of luck, because you’re off the radar. I don’t care all that much, but I guess I care a little, because I keep griping about it. Anyway, it was so foggy during 2/3 of the race that it was drizzly. I wear glasses, so my glasses got all wet (and fogged up when I ran up hills), and I would try to wipe them off with my fingers, which would kind of smear around the water and then make things blurry, which made me worry I would get sick to my stomach. But anyway, my friends Beth and Juliana and their babies came and cheered me on, which was really, really nice, and I met them at the finish, along with Joanna, who ran the 5k in her FIRST RACE ever.
FOOD: The Bay Area has great food, which almost makes it difficult, since there are so many choices! Rachael, Joanna, and I went to the Ferry Building Marketplace, the fancy schmancy gourmet food market in San Francisco. Thuy and her friend met us there for lunch. Unfortunately, it was so packed full of people that many places had lines out the door. We decided to try Mistral Rotisserie Provencale, which sells rotisserie chicken and stuff like that. The food was pretty rich (I got roasted potatoes which were swimming in olive oil and creamed spinach as my sides) but tasty.
I just got tired of writing about food, so I’m just going to mention some highlights:
– a restaurant in a car dealership in Oakland. We went there after the marathon. I had some sort of chickpea soup and a salad, Joanna had a fancy BLT that we initially couldn’t figure out was a BLT because of the wording on the menu, Beth had a polenta breakfast dish with butter and maple syrup, and Juliana had brioche French toast, I think?
– Ryowa Ramen in Berkeley. Yummy vegetable gyoza and miso ramen. I love me some good ramen, and the only ramen I can get around here is the freeze-dried packaged kind
– Chocolate cake! Juliana made the chocolate cake from the Moosewood Restaurant cookbook, and it was quite delicious
– Royal Coffee–an Oakland institution, which I unfortunately never frequented when I lived near there way back when
– and last but certainly not least, Zachary’s Pizza. Anyone who has been to Berkeley has most likely had Zachary’s. It is the best pizza ever. They do Chicago-style deep dish pizza, and luckily for visitors like me, they sell half-baked pizzas that you can finish off at home, so that’s what I did! Peter had never had Zachary’s before, and now he, too, is a believer.

16 Responses to I yarn for San Francisco