Here’s the new power tool I got for my birthday: 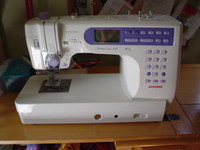 It is the fanciest thing I’ve ever owned! Of course, I still haven’t plugged it in. It is very high tech compared to my trusty old 1970 Elna Super, so I need to read the instructions carefully before embarking on any sewing projects. I was very surprised when I received this gift, but I knew something was up, since Peter kept calling my brother, and he NEVER calls my brother, unless he has some questions about lithium batteries or something. Also, he would call him then go outside, and afterwards he’d come back in and ask, “DID YOU HEAR ME?”
New candy discovery: Have any of you tried the Nerds Rope? It’s kind of disgusting, but I think it may be addictive. It’s like someone wet a long piece of red licorice and dropped it into a vat of Nerds. Peter discovered that if you twist it, it resembles a double helix. He refused, however, to taste it. Anyway, it’s kind of tasty, in a grody sort of way. I have also discovered that when I pick up sour Skittles in preparation to eat them, I automatically begin to salivate, and my tastebuds do that twinge thing that happens when you eat really sour things. Yeah, just like Pavlov’s dog.

16 Responses to the new power tool