I am suffering from a serious lack of blog fodder today, so I guess I will just show you these tomatoes: 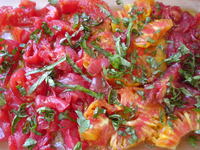 We belong to a CSA so we get fresh, organic veggies each week. Today I marinated some tomatoes with locally produced olive oil, balsamic vinegar, and basil. Later I threw in some beets that I roasted yesterday (wrapped them in foil and grilled them on the bbq for an hour). That, along with a baguette and brie, was dinner (though I have to confess that after dinner I nearly went to Jack in the Box for curly fries and those chocolate malts with chocolate chunks in them, but I didn’t have any cash, and I don’t know if fast food joints take credit cards?).
Thanks for your interest in the candy swap (and thanks, too, to those of you who signed on to help me get a free iPod!!). I have a Yahoo group set up already, but I haven’t done anything with it yet. I don’t want to step on the toes of the Candyalong, so I thought I’d wait until October or so (why October? I don’t really know, but it IS the ultimate candy month, and I just love Halloween so much it makes me crazy, and I just want to touch all the bags of Halloween candy and roll around in them). I’ll keep you posted. In the meantime, keep your candy eyes peeled.

11 Responses to you say tomato