My insane brother keeps his server and a bunch of other computer stuff in the basement, which seems a bit bleak to me, but oh well, Portland can be kind of bleak and rainy, anyway. He complained that his head looks tiny in this photo, but what can I say? The camera doesn’t lie! 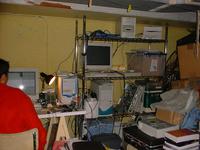 I can’t complain too much about him, though, since he installed some photo gallery software for me. Now I just have to figure out how to use it (which could take some time).
Today I took my mother to her eye appointment as well as to the optician’s to pick up new glasses. They messed up one of the lenses, and she complained that the glasses made her feel “disease.” You can probably guess what she really meant. While at the eye doc’s, I knit a few rows. Here’s the current status of the sleeves:

I’m trying to talk insane bro into taking off the header section that has the crazy handwriting and weird photos of me (if you haven’t guessed already, I had nothing to do with that “design enhancement” of the blog. If it were up to me, you wouldn’t have to look at my head). He is very resistant.

5 Responses to house of supereggplant