I haven’t unpacked yet

It’s going to take me a while to get all my photos organized, so I thought I’d just show a few of my faves! I do also want to tell you about all the great people we met in Japan. I swear the planets were all aligned or something, because we got to meet nearly everyone we hoped to meet (except we didn’t get to meet Suzy, cuz she ran off to Australia). Kelly has a very nice writeup about everyone we met, and I can’t top that, so uh, I’m not going to try. I do want to mention them all, though.
First off, we met Kat and Darin. Kat is super down-to-earth and was nice enough to take us to a bunch of crafty spots. Darin joined us for lunch and graciously dragged our luggage back to their apartment so we could continue shopping unencumbered (though I think he stopped in the park for a beer!). 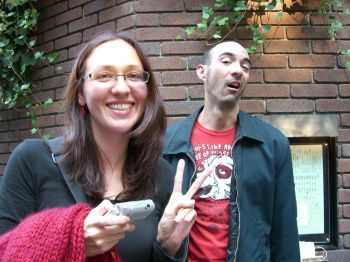 No, his face isn’t always like that, though his granny might tell him that if he keeps making that face, it’s going to stay that way!
Next we met Molly and Anjali in Nagoya for a fun dinner. They are even cuter in person than you could imagine! Molly IS actually freaked out by small animals; she started to go pale when we started discussing dogs. 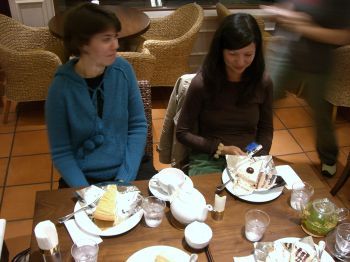 It also happened to be Kelly’s birthday, so we went to a cafe called Harbs (I swear! They served harb tea, you see. Har har! Maybe they should just call it Carbs, based on the mondo, American-sized chunks of cake we got!) to celebrate! Kelly had banana cream pie, and she declared it delicious! 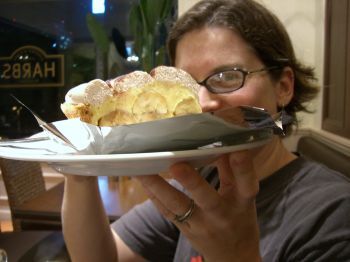 Okay, I think this will have to be continued. It’s bedtime, and I guess my photos are too big, because I have to resize all of them, blah blah. If this post seems disjointed, it’s because I was watching Grey’s Anatomy while typing, and it was, you know, distracting. Egads, I can’t believe Thanksgiving is next week! See? Disjointed. Good night!
This entry was posted in zip. Bookmark the permalink.

8 Responses to I haven’t unpacked yet