So a couple months ago, that Amy casually mentioned something about some little cupid dolls from KidRobot. It must have gotten filed away in my brain, because I noticed boxes of them in Japan and picked up a few. They come in different series and in blind boxes (i.e., there are numerous designs in a series, but you can’t tell which design you are getting until you open the box). I gave one of the Christmas ones to Amy and kept one. Okay, that’s not really true. After I opened my Christmas one, I decided I needed to keep one of the fruit head series that I bought. So I opened that box and then decided I needed to keep the second fruit head one I got. 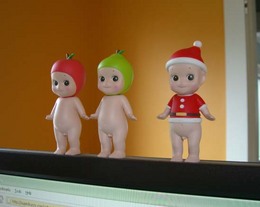 And now I am officially obsessed with these darn little Sonny Angel cupids! I want to collect all the fruit heads, but of course they are scarce here in the US. At least I got Amy back for starting me on this kick–I rekindled her fixation on the cupid heads, so now she is loony over them, too!
This entry was posted in General. Bookmark the permalink.

13 Responses to my widdle angels