Well, I have some pretty big news. My father died today. He would have been 91 years old on May 8. It’s rather morbid, but my brother, mother, and I have kind of joked about him dying for years, and now that it has finally happened, it’s a little shocking. 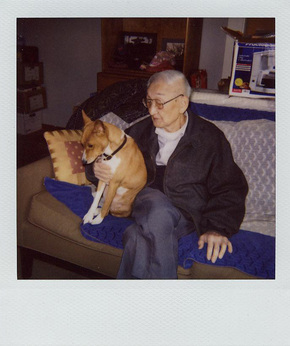 I actually didn’t see my father that often, since he was usually asleep whenever I was over at the house. I took this Polaroid just this last Friday, though, when my mother and father unexpectedly showed up and hung out for a couple hours. He was fine that day and in his usual mood–complaining that our house was too cold, asking for juice then griping that it tasted nasty, shouting at Deedle to sit by him. We went out for Japanese food and had a nice time.
Saturday he slept all day, which isn’t that unusual, but he also didn’t eat anything, which IS unusual. Then today he fell down the stairs and had to be taken to the ER in an ambulance. My brother called me, and it didn’t seem like such a big deal, but with each successive call, the situation became more serious–they had to intubate him, put him on a ventilator, perform CPR on him when his blood pressure dropped to zero. When it became clear he was probably not going to survive, I headed to the hospital. He never regained consciousness, and I have to admit I am grateful for that. He had been afraid of dying, so this way he didn’t really know he was dying. He died pretty peacefully and was not in any pain (not even from the tumble down the stairs). My mother declared that he was lucky and also that this was the nicest thing he had done for us (not that he died but that he didn’t have a long, miserable illness requiring constant care). It is nice that we can laugh and joke about it, actually. My father lived a long life, and his body was ready to go. He was a nutjob, and memories of his little quirks will stay with us for many years.
This entry was posted in General. Bookmark the permalink.