I’ve been back not yet a week now, and while I did not suffer from any jetlag, I am suffering from my usual time management issues. The weather has turned pretty icky, so I don’t much feel like doing anything (like running. Uh oh). Anyway, you have all by now read about Amy‘s splendid book signing for her equally splendid book, Bend the Rules Sewing


The book signing was held at local fabric shop Bolt, and it was packed. My primary concern was that I had arrived too late for donuts, but as luck would have it, there were plenty. 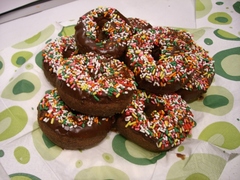 My big plan was to take photos of people eating donuts, but it didn’t quite work. Here I tried to force Sam to eat his donut so I could photograph it, but apparently asserting, “EAT THE DONUT! EAT THE DONUT, SAM!” is not particularly encouraging.
Since Melissa is a tender mother (with a very cute haircut), she did not force Sam to eat his donut until he was safely tucked away in a quiet corner.
Anyway, it was a great time, and I was happy to see a host of bloggers and crafters, including the always stylish Sally, the prolific and productive Susan (whose book, Bead Simple

, is available for preorder on amazon), the great crafty organizer and podcaster Diane, and many others. Good times, people, good times.
This entry was posted in sewing. Bookmark the permalink.

5 Responses to bending the rules