the convergence of good things 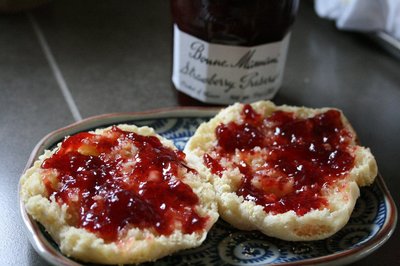 Check it out! I made some English muffins! It’s kind of like the stars all aligned, and I was MEANT to make these muffins. Now, I may get a little rambly here, so skip ahead if you’d like. The muffin making kind of all began with jam, Bonne Maman Strawberry Preserves

, to be exact. Melissa received a jar, and it was like she discovered a new planet or something. She really, REALLY likes the jam. I thought it’d be fun and funny to get her some, and who doesn’t love getting stuff in the mail, so I ordered it from amazon.
Since then, I have grown a bit fixated on wanting to order all manner of food products from amazon and just online in general. This led to my placing a grocery delivery order with safeway.com (I know they are kind of an evil corporate entity, but I wanted to try it, and I was actually pretty pleased. The delivery guy was just as nice as the ones from New Seasons Market), an order that included a jar of the Bonne Maman strawberry preserves! AND, just the other day the Oregonian published a recipe for English muffins, and what better way to celebrate the arrival of a jar of jam than homemade English muffins? 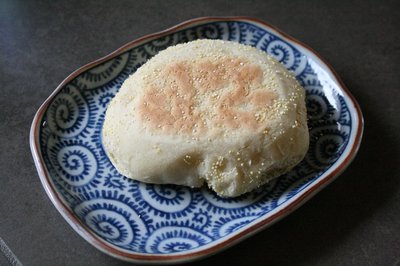 And THAT, my friends, is how I came to make these here English muffins. They are actually really fun to make, since you “cook” them in a frying pan rather than baking them in the oven. It doesn’t take long to make them, and I was frying them up just as the delivery guy pulled up to the house. It just doesn’t get any better than that.
Read on for the recipe!

English muffins (from the Oregonian)
Makes 8 muffins
2 tsp active dry yeast
1/2 tsp sugar
1 cup warm water (105-115 degrees), divided in half
1/2 cup warm milk (105-115 degrees)
2 1/3 cups bread flour (I used King Arthur all-purpose flour)
2/3 cup all-purpose flour (I used regular all-purpose flour)
1 tsp salt
Cornmeal or rice flour
Proof the yeast by putting the yeast, sugar, and 1/2 cup of the warm water in a small bowl. Stir together with a fork to dissolve the yeast. After the mixture starts to foam up (meaning the yeast is activating), add the remaining 1/2 cup of warm water and all the warm milk.
In a large bowl (I used my stand mixer, so if you are going to do the same, which I recommend, use the mixer bowl) combine the bread flour, all-purpose flour, and salt. Add the yeast mixture. With the dough hook attachment on the stand mixer, gently mix the ingredients to combine (if you don’t have a stand mixer, mix with your hands or a rubber spatula). Knead the dough with the dough hook for 3 minutes (or, if you’re using your hands, turn the dough out onto a lightly floured surface and knead about 8 minutes). The dough will be VERY SOFT, like disturbingly soft.
Place the dough in a lightly greased bowl and cover with plastic wrap AND a tea towel (I don’t know why you have to do both, but I just did it because the recipe told me to). Let rise at least 2 hours or until doubled in size.
Turn the dough out onto a lightly floured surface and deflate. My dough was still really soft. Gently roll the dough into a log. Divide into 8 equal pieces by pinching them off with your fingers. Roll each into a ball then roll in cornmeal or rice flour (my balls weren’t that sticky because I probably used too much flour on the surface, so not much cornmeal stuck). Place on a baking sheet 2″ apart (I put them on a parchment-lined baking sheet). Place another baking sheet on top so the balls will rise widthwise rather than heightwise. Let rise about 20 minutes.
Heat a griddle or cast-iron skillet over medium-low heat (I don’t know where our cast-iron skillet is, so I just used my nonstick frying pan. I didn’t want them to, you know, stick). Gently lift and place the muffins into the pan (my pan is pretty wide, so I was able to fit 4 at once). They will puff up rather than out, so you can put them relatively close together. Cook each side about 10 minutes, or until they are golden brown. Place cooked muffins in a tea towel to keep them warm. Split them with a fork (now I know what “fork split” actually means!), toast, and butter and jam them up good!
This entry was posted in baking. Bookmark the permalink.

27 Responses to the convergence of good things