I was looking at photos of actresses at the Emmy Awards and noticed they all do the hand-on-hip pose, and I was thinking it was kind of obnoxious then realized I DO THAT IN MY PHOTOS, yet without the flair or fancy jewels (and yes, I know I’m not doing the pose in this photo)
Some of you know of my Japanese craft book “problem.” I just can’t seem to collect enough of them. Well, thanks go to Sally and Melissa for momentarily distracting me with KOREAN craft books. 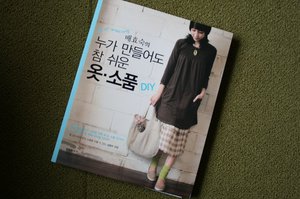 This book, Joy of Making Korean blah blah Korean DIY, has patterns for both women and men (tiny Korean men, not Peter-size men). There are lots of super cute patterns to tackle. I’d been searching for a pattern for a cute little collared T-shirt for a while, and this one is nearly perfect. I couldn’t figure out what the sizing numbers meant, so I just compared the pattern lines with an existing pattern and decided to make a size medium (the shoulders in the small looked super tiny). I’d like the neckline to be a little smaller, perhaps, but the medium fits perfectly in the shoulders and underarms. I will definitely use this pattern again, and I’m already thinking about a long-sleeve version!
So, how does one acquire said Korean craft book? Well, I went a little crazy tracking this baby down. I ended up ordering it through Gmarket, a storefront for a bunch of individual vendors. I tracked down the book, not by the ISBN (978-89-7090-540-2. You can find the book via the ISBN for domestic Korean vendors but NOT for international shippers) but by typing in “DIY” then selecting “books, CDs & DVDs.”
Now, not all of these vendors will ship to the United States. I went with vendor Bandi & Luni’s but only because it seemed to be the only one that would ship. The book itself was a great bargain: $10.50 or something. The shipping, however, was nearly $30. I decided to take the plunge because I was very curious about how the order was going to work. Also, it ends up being worth it for me because I know I will use at least 5 patterns from this book. Way to rationalize, yes.
Okay, so here’s where it got a little weird. I tried to create an account but did not succeed with Firefox. So, I went to IE and managed to create an account. When I tried to place the order, though, I had to switch back to Firefox, because I got errors with IE. I had two browsers open and just went back and forth to see which one worked! I paid with PayPal, and I wasn’t sure if the money disappeared into some black hole of cyberspace, but a mere week later, the book arrived!
This entry was posted in Uncategorized. Bookmark the permalink.