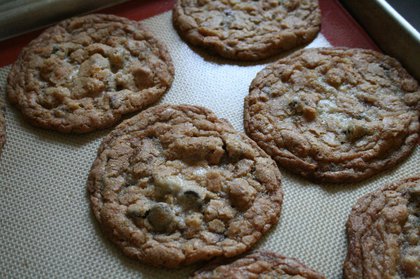 I saw these Momofuku Milk Bar Compost Cookies online somewhere, and seriously, any cookie that contains chocolate chunks as well as salty snack foods is a winner in my book. I can’t seem to locate where I originally found the recipe, but you can find the recipe along with detailed instructions (and funny commentary) on the Amateur Gourmet’s site here.
The fun thing about these cookies is you throw in a cup and a half of cookie add-ins, like chocolate chips, rice krispies, what have you. I went with some rice krispies, some chocolate chips, four individual Reese’s peanut butter cups, and a Snickers bar. I think next time I would increase the Snicker component as well as the chocolate chips. The recipe also calls for a cup and a half of snack foods, as in chips and pretzels and such. Here’s what I went with: 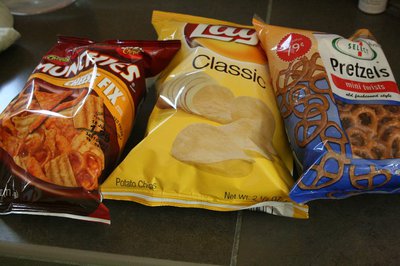 I had hoped to use Ruffles, but they didn’t have any plain Ruffles at the 7-11 I went to. I was also going to include Combos, because, you know, Combos are so awesome, but I wasn’t crazy about the selection. Next time? Ruffles and maybe goldfish.
I think the butter I used was not very fresh. My cookies came out really flat (my cookies have been doing that lately, even with fresh baking powder and soda and such). The cookies are still tasty and chewy, but not, in my opinion, death-defyingly delicious like the New York Times chocolate chip cookies (which we have renamed the M.F. Cookies, and I will let you guess what those initials stand for). I will still make them again, though, because I believe there is room enough in this universe for unlimited cookie recipes.
This entry was posted in baking. Bookmark the permalink.