I like marshmallows. Many people, I think, like the idea of marshmallows, but they don’t actually like to eat them. “Too sweet” is the frequent complaint. But when you pair the marshmallow with graham crackers and chocolate, what’s not to love? I discovered this recipe for S’mores Brownies on Joy the Baker’s blog, and it sounded quite yummy.
The recipe calls for putting large marshmallows on top, but hey, I just happened to have some Peeps and mini marshmallows, so I thought I’d try that instead. But alas, poor Peeps: 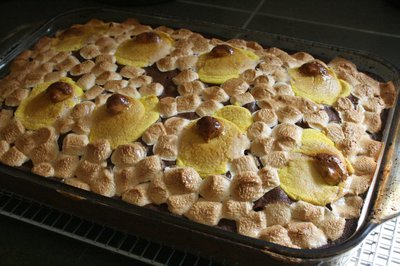 I’m MELTING. Ha ha. Poor Peeps have been reduced to teeny teat-like blobs.
The brownies came out cakier than I had expected (though actually, I had no expectations at all, so I don’t know what I am talking about): 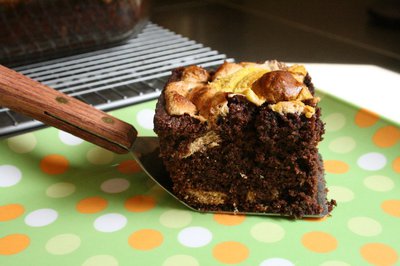 After the brownies cooled completely, though, they were less cakey and more flavorful, so yes, you should wait to try them until they are completely cooled. Now, Joy the Baker suggests adding marshmallows to the batter itself, and I did not do this. Next time I will, as I think it might give the brownies a chewier texture. There are also crushed graham crackers in the batter, which is kind of awesome, but I don’t think there was enough, so maybe I will add more next time? I don’t know.
This entry was posted in baking. Bookmark the permalink.

9 Responses to A peepin’ good brownie