Some days I find nothing to blog about, but today isn’t one of them! The mailman brought not one, not two, but THREE yummy packages today. The first is an amazing array of goodies from Heidi:

See those coasters? SHE MADE THEM.
Second is the yarn I ordered from elann to make Rogue:

If it weren’t for that Rachael, I never would have known about Rogue! And yes, I have joined the Rogue-along group!
And third, some additions to my fabric stash: 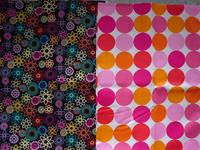 I know, I know, I REALLY need to stop buying fabric! I’m planning to make yet another bag out of the Disco Dot (yes, that’s what it’s really called) fabric. I wasn’t going to get the spyrograph fabric, but the online store has a $10 minimum, so what could I do?
Well, the Gleevec seems to be working wonders on my brother‘s white blood cell count, but unfortunately it hasn’t turned him into a cheerful being. He has been “helping” me with my new banner. I asked him why there was that ugly white space underneath the banner, and he said it’s because I have “too much trash” in the right-hand column. I then told him that really, that is HIS fault, since he refuses to create a third column for me. So he e-mailed me back and said this is what three columns would look like (and I don’t know why, but every time I see it, I start laughing really hard):
I            LOOK AT MY HUMOUNGOUS    HERE’S PERSONAL DETAILS OF
bak-              LIST OF LINKS                      MY EATING HABITS
ed
some-
thing
today