Action Hero Melissa, Mrs. H, and I ventured out this morning to Woodland Woolworks. It is quite a haul to Carlton, where WW is located, but we braved the rain and the two-lane roads and made it. WW is basically a huge warehouse. We hit the “stash” room first, and though all the yarns, including various Rowan yarns, which I’ve been wanting to try (yes, I confess, I have never knit with Rowan yarns!), were 15 percent off, I didn’t buy any. We had fun sifting through the yarns even though the stash room was unheated. The “showroom” has samples of all their available yarns plus a lot of books and magazines and walls of needles. I must say that while it was all impressive, the most amazing part of that showroom was the swatches. They had the most incredible and intricate swatches I have ever seen!
We headed back to Portland and hit Lint, since it was the first day of their sale. A lot of the winter yarns were 30-40 percent off, and they also had a sale room (sorry about the blurry photos):

That’s Melissa there rooting through the boxes. She showed enormous restraint, though, and bought NOTHING! I got some GGH Sombrero, a tape/ribbon yarn:

Has anyone used this stuff before? It calls for a pretty large needle, but I don’t know if I want something all loose and drapey. They had 5 balls of GGH Samoa that I wanted, but I need 7 to make the top I want, so I resisted. Sigh. GGH is another yarn I want to try.
It was a fun day, and I wish I could go adventuring like that every day! I leave you with these goodies that Mrs. H brought. The ribbons are from Farmhouse Fabrics. They have the BEST ribbons! 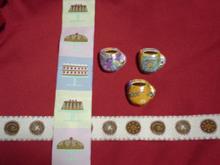 9 Responses to the great yarn excursion