cram chowder by the sea

I have mentioned before my mother’s creative spelling. Cram chowder is one of them, and it is very appropriate for today, because I got to eat some tasty cram chowder from the Splash Cafe in Pismo Beach with the one-and-only Rachael (wearing her luscious Noro sweater), her adorable mother, and the Hedster (modeling her snazzy new hairdo). 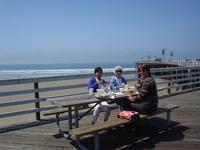 The cram chowder comes in a grilled bread bowl! I had never been to this place, but apparently Rachael has the phone number programmed into her cell phone so she can call in her order and have it ready by the time she hits the beach! She is one smart cookie. I wish we had had hours and hours to play.
Another of my mother’s spellings: hot closspan. The queen of the hot closspan is Rachael’s mother. She had sent me her recipe a while back, but I haven’t tackled it yet. I had my fingers crossed that, what with Easter and all, she made a batch of them and was left with a few extras. MY WISH CAME TRUE:

Thanks to all who wished insane brother a happy birthday!

8 Responses to cram chowder by the sea