My mother left for Japan today, which means I will soon head up to Portland to, you know, be with my father. SERENITY NOW. Anyway, he and my brother had a discussion and decided they were in agreement that I am “a pain in the ass,” so I figure I am going to try to live up to their ideals. Ha ha ha! Watch out!
My father will undoubtedly ask me as soon as I enter the house, “Did you bring me a present?” It doesn’t really matter what it is as long as he gets something. Food isn’t always good, because he usually squirrels it away in his room, and the ants inevitably find it. So today when I was out running errands I found this: 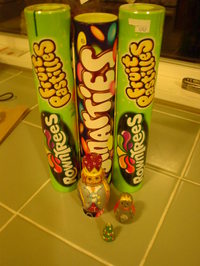 Matryoshka, also known as “Russian nesting dolls” and also on my list of best-ever inventions. This is supposedly the Nutcracker. Whatever. He will like it. I also found these giant tubes of Rowntree’s Fruit Pastilles, yet another tasty candy from abroad. (Re: the Smarties. Is it me, or do they have a donut aftertaste?)
For those of you searching for knitting content, yes, I’m knitting, but I’m knitting something that is a secret swap thing, so I can’t show it to you, and it’s also been one of those weeks where I fall fast asleep in front of the TV, so progress has been slow. I did start the Ribby Cardi, but you don’t really want to see 1″ of ribbing, do you? Wouldn’t you rather see giant tubes of candy and matryoshka?