FOR those of you who want the ISBN # for the Hello Kitty book, it’s 4-387-00041-4. The link to the book on amazon Japan is here. It appears they are not in stock, though. Stella bought the book at Kinokuniya Bookstore in San Francisco. Oh, dudes, I just discovered that you can order books online through Kinokuniya! They don’t seem to have the Hello Kitty book, but if you click on the link, it brings up a bunch of Japanese knitting books! WOOHOO.
*******************
I bought a cute butternut squash the other day, and I had just the recipe for it: Butternut Squash, Rosemary, and Blue Cheese Risotto from the February 2005 issue of Bon Appetit. I was missing several ingredients called for in the recipe, so, well, I just left them out, and it was still super tasty! 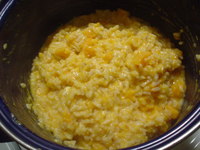 Read on for the recipe …

Butternut Squash, Rosemary, and Blue Cheese Risotto
February 2005 Bon Appetit (it’s not on epicurious.com yet)
4 servings (mine made more like 6 servings)
7 cups low-salt chicken broth (basically 3 cans)
3 tablespoons butter
1 1/4 cups chopped onion
1 2-lb butternut squash, peeled and cut into little bite-sized pieces
2 tsp chopped fresh rosemary
2 cups arborio rice
1/2 cup dry white wine
4 cups (packed) baby spinach leaves
1/2 cup whipping cream
1/2 cup freshly grated Parmesan cheese
1/3 cup crumbled blue cheese
Bring the chicken broth to a boil in a large saucepan, then reduce the heat to low and cover. Meanwhile, melt the butter in a heavy LARGE pot over medium heat. Add the onion and saute for about 5 minutes or until tender. Add the squash and 1 1/2 tsp rosemary and saute 4 minutes. Add rice and stir for about two minutes. Add the wine and simmer for about a minute, until evaporated. Add the hot chicken broth and bring to a boil. Reduce the heat and simmer, uncovered, until the rice is tender and the risotto is creamy. Add small bits of broth as needed. Stir the mixture every once in a while. This all takes about 18 minutes. Stir in the spinach, cream, and Parmesan cheese. Throw the blue cheese in just before serving and sprinkle with the remaining rosemary.
*Notes: I left out the onion (but I did throw in a clove of garlic), the cream, and the spinach. It was creamy enough without the cream, but it would have benefited from the spinach, I think. This would taste good with some sausage. I served it with a big salad.