This morning a woman was attacked and killed by a shark (it’s not confirmed yet that it was a shark, but it is pretty likely) at Avila. THAT IS WHERE PETER HAS HIS BOAT. How creepy is that? Plus, Peter jumped into the water last weekend when he visited the boat! This poor woman was going for her daily swim around the pier when she was attacked. Very scary and very sad.
And now for something completely different, today I went to Target and bought some of the new groovy M&Ms. I am a sucker for packaging and for, well, COLOR. I was a bit disappointed with the M&Ms. I had envisioned them to be swirls of color, but instead it looks like a bunch of M&Ms were accidentally dropped into a pile of crunched up chips of M&M coating: 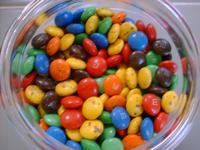 I started on the top ribbing of the ChicKami last night only to discover that I was following the incorrect section of the pattern! I want to make the wide straps, but I was following the directions for, I dunno, the skinny straps, I guess. Now I have to dismantle (or “frog,” I guess the correct terminology is) it and redo it. It’s not a large section, though, so it should be fine as long as I don’t drop stitches at the ends.