Someone have me committed, please. I decided it might be nice for Deedle to have a canine companion, since her separation anxiety has been a little severe lately. I also decided she should have a basenji companion, since, well, I like basenjis. I certainly wavered and went back and forth, but then the perfect dog sort of appeared and fell into our laps. May I introduce Barkley*:


He’s a 2-year-old brindle boy (everyone told us that having two basenji bitches was tantamount to suicide, or would that be homicide?), and he’s really a good dog. His owners decided to rehome him because they are out of town a lot, and the dog was forced to spend a lot of time by himself. He and Deedle got along fine (we met at a dog park), and they were great on the drive home (2.5 hours), but once we got inside the house (i.e., Deedle’s turf), she decided she hated him and has been horribly snarky ever since. So much for easing any sense of loneliness or anxiety! I’m hoping this situation resolves itself quickly, though, because I have places to go and people to see, and I don’t want to come home to basenji hair and blood! How could she hate this little guy? 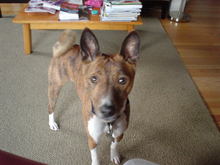 *Yeah, the name’s gotta go. I think we are going to call him Berkeley, since it’s pretty close to Barkley (unfortunately, Peter would not agree to Sparky).
This entry was posted in General. Bookmark the permalink.

36 Responses to super eggplant suffers from a psychotic break