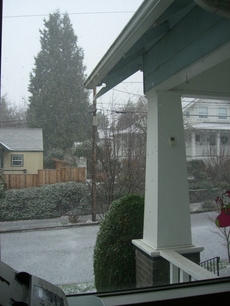 Can you tell? I know it’s probably not very impressive to you northern territory types, but it was pretty thrilling for us Portlanders.
Last week my mother brought me some pink champagne cake. When I was a kid, we would often get pink champagne cake from Ikeda’s Bakery (it later became the Hillsdale Pastry Shop, and now it is Baker & Spice, which is totally unrelated to Ikeda’s or Hillsdale. B&S does not have the great cream-filled chocolate donuts or the square maple bars that Ikeda’s and Hillsdale had. Sometimes change is not for the better!). I always loved pink champagne cake because it was so pretty.
Isn’t it lovely? My mother was so distracted by the chocolate cake and ugly sweater I gave her that she forgot her purse here.
Anyway, that’s all I’ve got. I think I’ll go drink some decaf now.
This entry was posted in General. Bookmark the permalink.