We’re expecting to do a big honkin’ update to superbuzzy in the next week or two, and there should be some pretty neat Japanese fabric goodness! In the meantime, though, there have been some little additions to the site, including more cute patches and fun clips and magnets. We just put up some new buttons and purse handles, too, and they are so cute I had to tell you about them.

These, too, look like candy (it’s becoming painfully clear now why I like these buttons so much, isn’t it?). They remind me of those little dot candies that come on the paper strips. I used to buy those at Farrell’s Ice Cream Parlour all the time!
And the fun purse handles, which we have in a variety of colors: 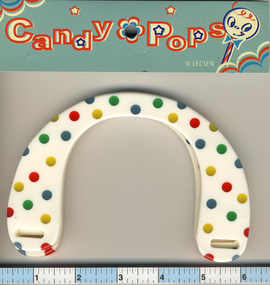 Yes, these look like those Brach’s candies from the grocery store that are sold by the pound (Pick-A-Mix)! You know what I mean, right, those nougaty things with colored chunks in them. They didn’t taste that great but I always wanted to eat them because they were so pretty. Now I am feeling a little obsessed about those nougats. I might have to make a trip to the store …
This entry was posted in zip. Bookmark the permalink.