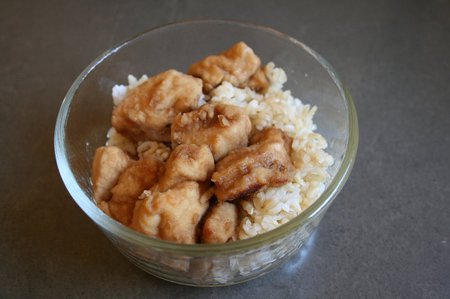 I suppose if I had any self-respect I would have put the chicken on a cute plate instead of leaving it in the microwavable glass container, but hey, I’m keeping it real.
My friend Yumi visited from Japan this summer, and she made a big feast for a bunch of us. There were all kinds of tasty morsels, but I kept coming back to this chicken nanban. So delicious! I was so anxious to eat it again that I found a recipe online somewhere and made it. It was pretty labor intensive but yummy. Yumi then sent me her recipe, which is much easier to prepare. I think in the end I might go for a hybrid of the two. Oh, and for you non-chicken eaters, you can use the recipe with tofu or eggplant or whatever.
Read on for BOTH the recipes, plus commentary …

CHICKEN NANBAN – recipe found online somewhere
serves 4
Ingredients:
1 lb chicken thigh, cut into bite-size pieces (I used boneless, skinless chicken breast, because that’s how I roll)
Sake
S&P
1/2 cup rice vinegar
4 Tbsp sugar
4 Tbsp soy sauce
1 tsp chopped red chili pepper (I used the shichimi)
garlic
1 Tbsp veggie oil
katakuriko or cornstarch
Sprinkle some sake and the S&P on the chicken and set aside for about 10 minutes. In a saucepan, combine the vinegar, sugar, soy sauce, and red chili pepper. Heat on low until the sugar dissolves. Dust the chicken with the katakuriko or cornstarch. In a large skillet, heat the veggie oil. Add garlic. Add the chicken in a single layer and cook until brown, turning as needed. Pour the sauce over the chicken and cook until the sauce thickens a bit. Serve with rice. Oh, and a nice presentation is to line a bowl with lettuce leaves and put the chicken in there.
YUMI’S CHICKEN NANBAN
serves 2-4
2 chicken thighs (or breasts. I used breasts. I actually used 6 breasts, and the two of us had enough left over for a couple meals)
2 Tbsp katakuriko (or I guess you can substitute cornstarch)
2 Tbsp flour
1-2 tsp ginger (I used powdered ginger)
1-2 tsp sake
Sauce:
4 Tbsp soy sauce
1 Tbsp sake
4 Tbsp sugar
5 Tbsp rice vinegar
1 tsp red chili pepper, thinly sliced, or shichimi
1 piece garlic, sliced
1. Cut chicken into bite-sized pieces. Grate ginger over chicken and sprinkle some sake over the chicken, too. Set aside.
2. In a plastic bag or bowl, mix together the katakuriko & flour. Toss the chicken pieces in this (the bag was an easy method. I liked it)
3. In a large bowl, mix all the sauce ingredients together (since I used 6 breasts, I doubled the sauce. I now feel this was not necessary, because I had A LOT of extra sauce)
4. Heat some oil in a large skillet and cook the chicken until brown on both sides (I used a nonstick pan and probably should have used a bit more oil for maximum crunchy sides, but the chicken still cooked, and it was good)
5. Put the cooked chicken into the sauce and let sit for at least 30 minutes (I think next time I would pour the sauce over the chicken in the saucepan instead of putting the chicken into the sauce in the bowl. I think I would let the sauce heat up a little bit then turn off the heat)