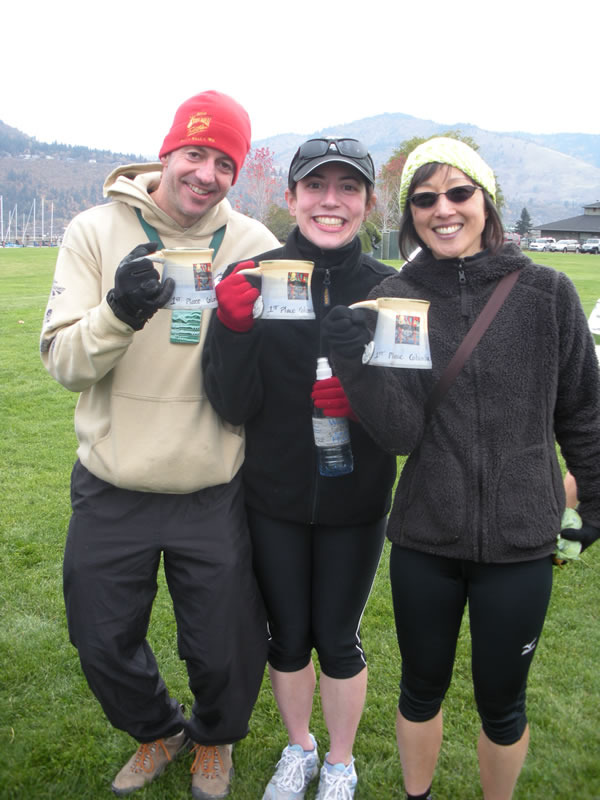 Photo stolen from Gorge Marathon site
I don’t talk about running a whole lot, but it’s one of the things I like to do. I’ve been running for more than 20 years now, so let’s just say I have passed my peak. I hope to keep running until I am old and senile. I have never been competitive, and I am certainly not a competitive runner, but every once in a while, if a race is small enough, I can score a little something in an age group award.
I just ran the Columbia Gorge Half Marathon in Hood River, OR, and dang, it was totally GORGE-ous. The course snaked up and down the old highway that runs parallel to the Columbia River. The fall colors were in full force, and we even got to run through a tunnel at one point. Fortunately, it didn’t rain, but it was pretty cold! There was a full marathon and a half marathon.
People haven’t discovered this great event yet, so the fields were relatively small, small enough that I won a giant mug for winning my age division! My friend Fran and her friend Frank also won their age divisions! The mug is huge and, as you can see, handmade. Hood River is known for the outdoors and windsurfing and hippies, so the mug, you know, reprezents, or whatever.
It was a really fun and friendly event, and a good time was had by all, including Christina, who is quite a badass, and whom I hope will continue to join us on our weekend runs.
Okay, I should have a finished object up soon, and Peter has already had some choice comments about it. Consider yourself forewarned.
This entry was posted in General. Bookmark the permalink.

8 Responses to mug of champions