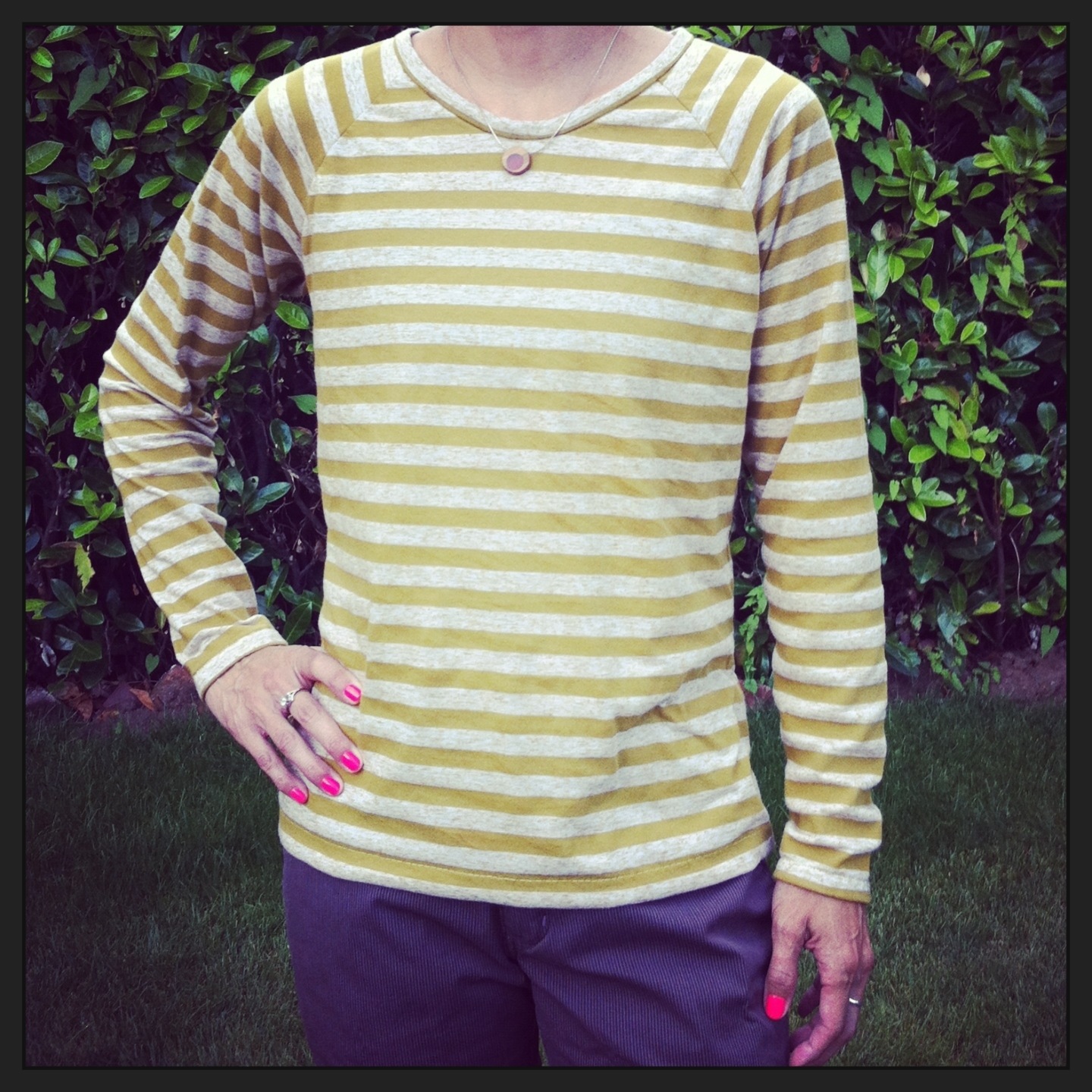 I know you all must be terribly excited that I made yet another striped raglan t. I would promise to stop posting them, but then I would be a liar. Anyway, this one is long-sleeved and thus very different from the previous t, right? Fabric is also from Girl Charlee and is a rayon cotton blend, I think. It is a bit weightier than that super drapey slippery jersey stuff. I love t-shirts. Over and out. 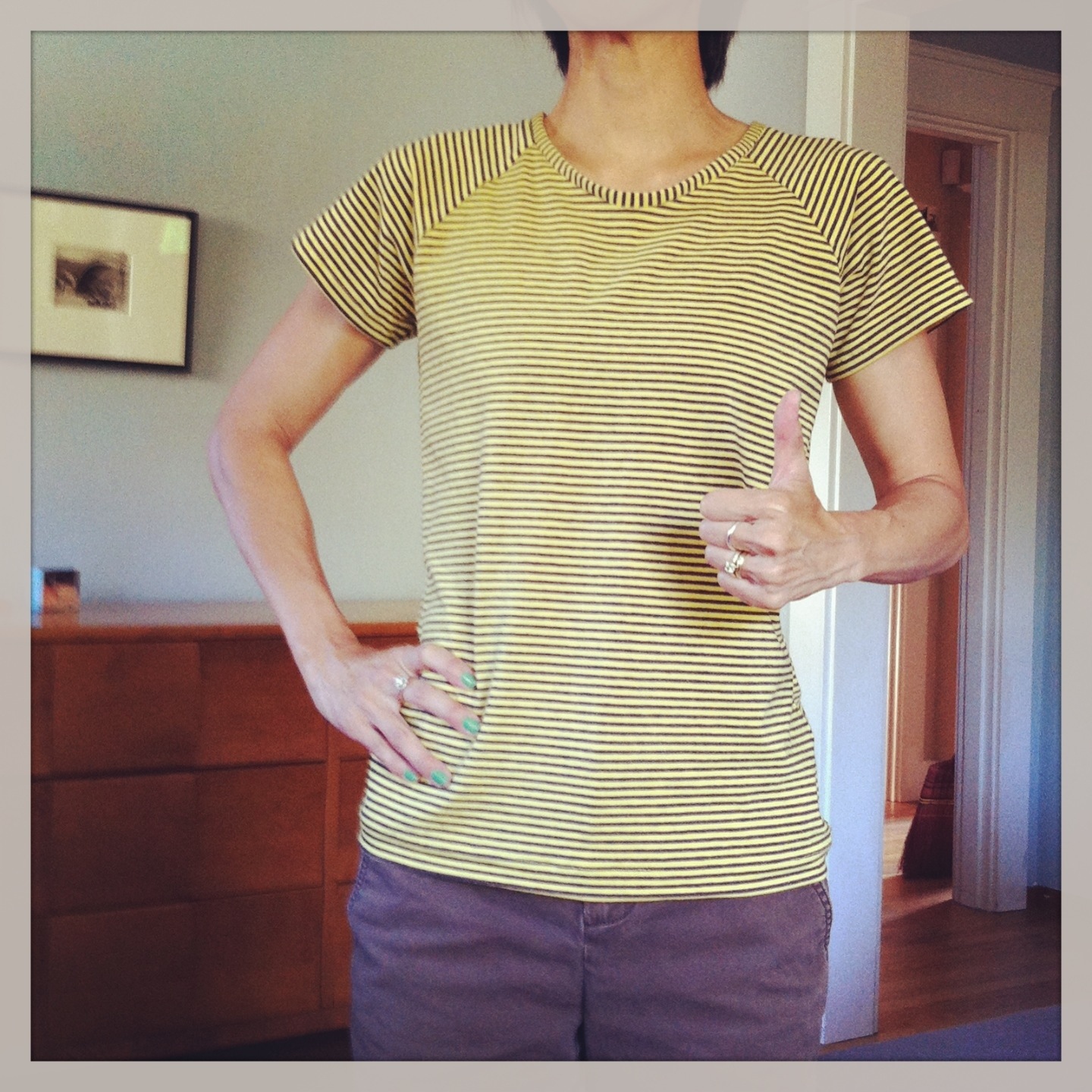 And it is another t! I decided I needed a good raglan pattern, so I copied an existing t to give it a try. I didn’t want to ruin any of my new Girl Charlee knit fabric** so I dug some cotton Lycra out of my stash. The Lycra is a little stiff (I want something a bit more drapey), but by jove I think I am happy with the pattern!

**Full disclosure: that link goes to the account setup page, which has a referral code. If you don’t want to do it, no biggie! 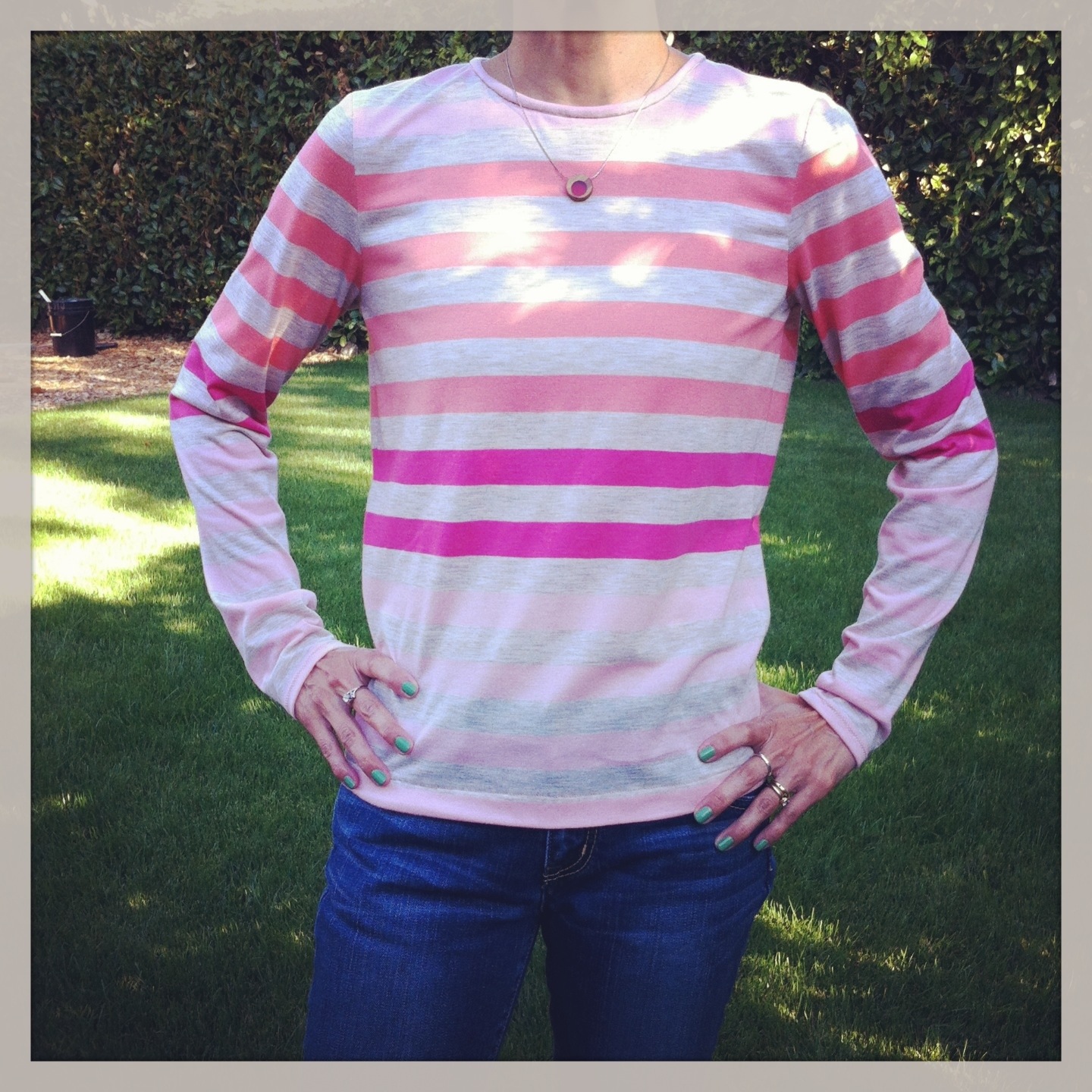 One can never have too many t-shirts. I got some nice knits from Girl Charlee Fabric, so I thought I’d start with a basic long-sleeve t. The fabric is supposedly cotton but feels more like a blend. It’s super soft and drapey. I got some more fabric so my plan is to make a dress and a raglan t or two. I highly recommend Girl Charlee (I would include a link but my computer isn’t on and I haven’t had any coffee yet). 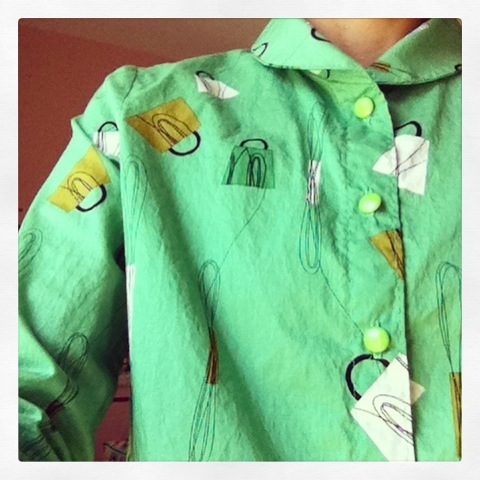 I am doing this on my phone, which is probably old news to most of you but a novelty to me! Anyway, I made a few changes to this shirt pattern, and I think I now have a template I can use over and over. The fabric was designed by Chico Hayasaki and made by Kei Fabrics. It is a wonderful, buttery cotton.

Deleting a bunch of users

This is you-know-who’s brother and I’m getting lots of fake users on this blog clogging up my email. I’m going through and deleting inactive users.

Sorry if this makes a mess as I may have gotten a little click-happy. If I deleted your comments or account, I apologize.

Posted in Uncategorized | Comments Off on Deleting a bunch of users 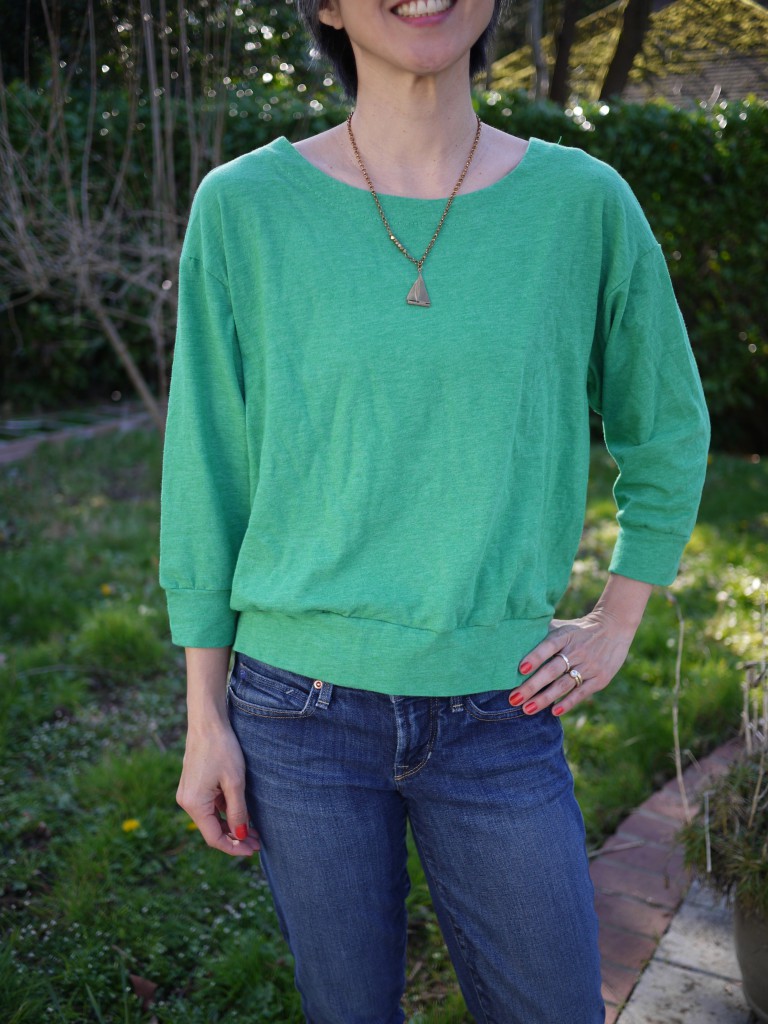 I made a shirt for St. Patrick’s Day! Actually, that is a lie. It is just a coincidence that I sewed a green t-shirt. I had this fabric in my stash. I think I got it at the Fabric Depot outdoor sale, but I can’t remember. Anyway, it is very soft and lightweight and was thus a bit of a pain to sew, but I didn’t let that stop me.

This style is new to me. I usually don’t wear dolman or super drapey sleeves (not on purpose, anyway), and I definitely don’t wear tops with gaping neck holes. That’s mostly because my neck is usually cold. I wear turtlenecks pretty much every day all winter, not as a fashion statement but because my neck is frozen. Anyway, this neckline is pretty huge. If I make any hasty moves the top could easily slip off a shoulder Flashdance style. I haven’t tested that out, though. It’s still too cold to wear this thing.

So, the pattern is Heather from Tamanegi Kobo. I have ordered patterns from them before, and I love them! You print the PDF pattern out and tape all the pieces together. The sizes seem to fit me well, and I rarely have to make adjustments (though I will probably make the neck hole smaller on this one and make another one). This one was very easy and straightforward to sew and didn’t take long to whip out. 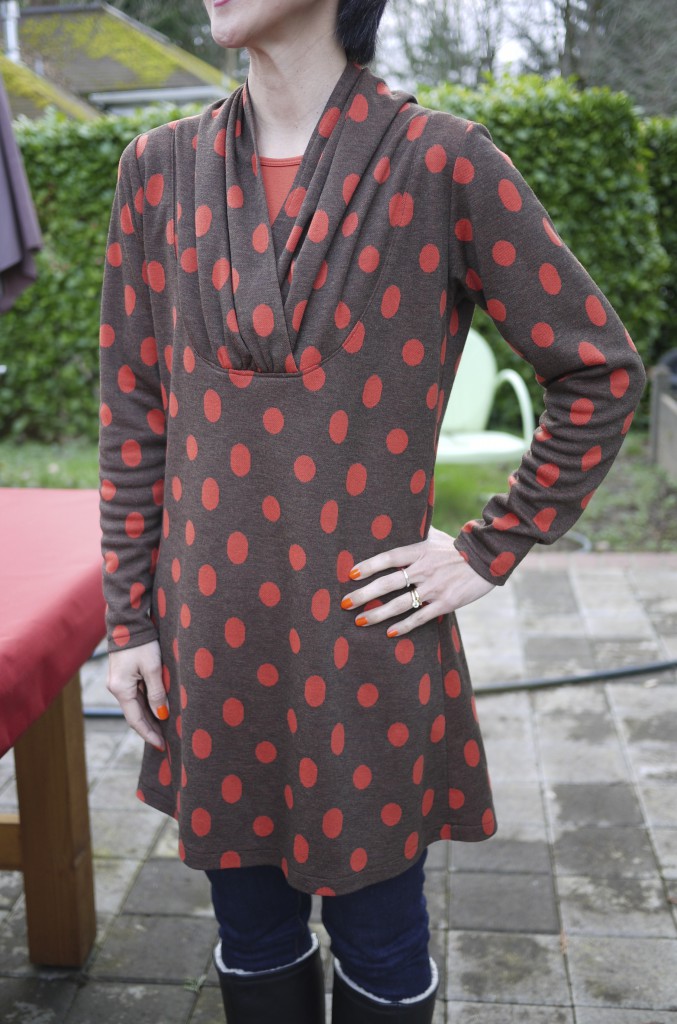 So I have been on this t-shirt tunic/dress kick as of late. The nice thing about them is they keep one’s backside warm during the winter months. Then, come spring, you can just wear them as dresses, I suppose. Well, anyway, I thought I would mix things up and change the neckline. I found a pattern for a shawl collar in a Sewing Pochee magazine I picked up in Japan last fall and superimposed that over my basic tunic pattern. I had this weird sweater knit fabric I got at Fabric Depot a couple years ago, and that seemed ideal for this. I am not really used to this style of neckline, so I find myself constantly fiddling with it. Other than that and the lack of side pockets (I was simply too lazy to put them in), it is pretty comfortable and easy to wear. 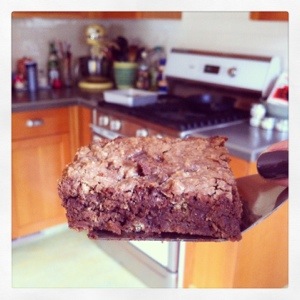 Mix everything together and spread into a greased 8″ square pan. Bake at 350 for about 20 min (do not overbake!). Let cool completely before digging in (trust me on that. You won’t get the awesome dense chewiness if they don’t cool) 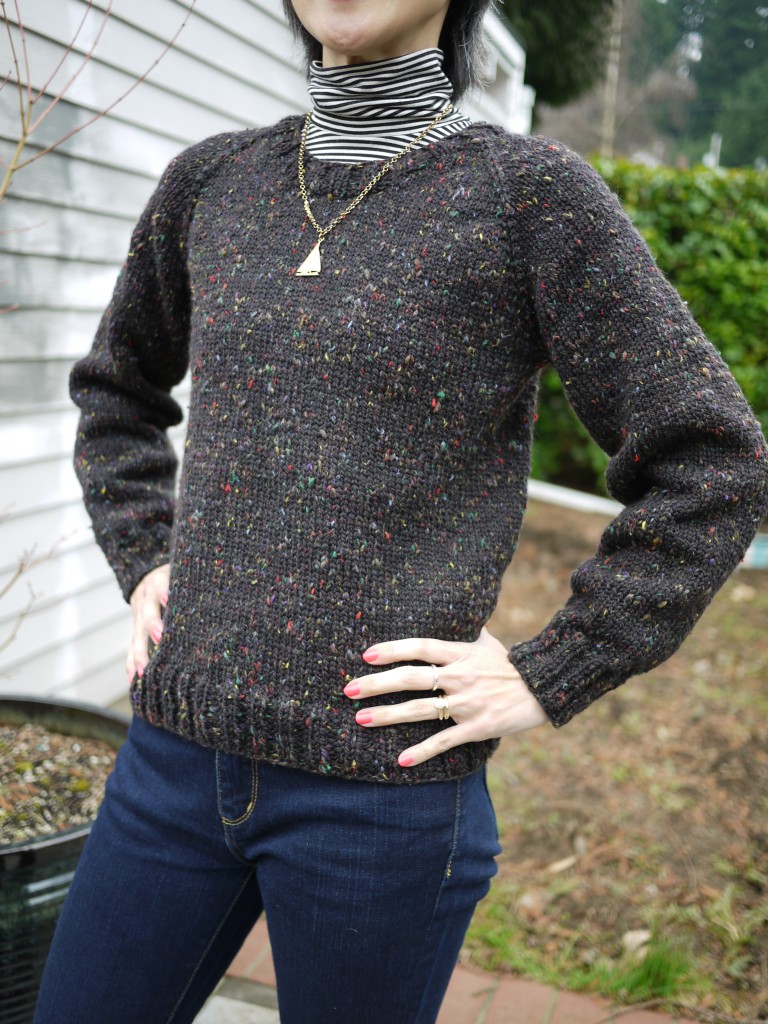 Surprise! I finished a sweater! I know, it is practically unbelievable.

I had this sweater in my stash for several years. It’s that Needful Yarns London Tweed. It is super soft! I started knitting something with it, but then I went on my extended knitting hiatus. I’d been wanting just a basic, no-nonsense pullover, and this seemed like the perfect yarn for it. I got the Raglanify app for my iPad to try out. I must confess that I did not have high hopes for the app. It just seemed too simple or something. Well, I was WRONG, because it churned out exactly what I wanted! The fit is pretty much spot on. The only adjustments I made were to the sleeves (for anyone curious, I added a few stitches to the sleeve and then decreased more stitches than were called for. I should have tapered the entire sleeve, but I was too lazy to rip out the whole sleeve, so I just went halfway and called it good). I will definitely be using this app again.

Anyway, it might not be the most exciting sweater, but I am pleased with it. Next I am planning to make Shellseeker in crazy clown sweaters. I am anxious to start swatching, but I have to do my nails tonight. It is challenging to prioritize. I stopped knitting for a couple of years for some reason. I would like to blame the dog, since she had a habit of sitting RIGHT next to me, which made knitting awkward and my arm sore, but about a year ago she stopped getting on the couch (she is getting too old and weak to get up there). I have some other excuses, among them just sheer laziness and wanting to sprawl on the couch and veg out, and then there was the newfound nail polish obsession, which interferes with knitting time.

Anyway, I seem to have a renewed interest in knitting again, which I am happy about. I am working on a boring sweater right now, but I also just finished this hat. It is for someone with, supposedly, a monstrously large head. I have my doubts, but I hope it fits and that she likes it.

The pattern is Gretel by Ysolda Teague. I used KnitPicks Swish Bulky, which is much bulkier than the yarn called for, but I figured it would make a large hat for the large head. It did. The stuff knit up very nicely, even though I screwed up the pattern at some point. The yarn is very soft and yummy, plus I did that tubular cast-on, which is pretty great and so wonderfully stretchy.

Anyway, there you go. Oh, and my friend’s daughter, Paulina, reminded me that I should post to the blog, so this one is for her.